New York "Still Mind" Aiki Shuren Dojo is a affiliated with Iwama Takemusu Aikikai, a member of Aikikai World Headquarters in Japan. Our lineage meticulously preserves the founder's teaching methods and style as it comes through Morihiro Saito Sensei, one of his two top students with the rare honor to take over the founder's dojo. We are currently supervised by Mark Larson Sensei, who received the highest honors from Saito Sensei. By following the most advanced teachers, our dojo accesses Aikido training at the highest levels. 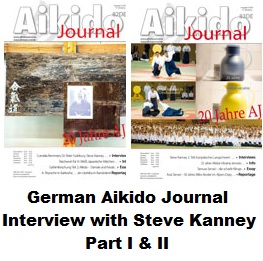 Steve Kanney is the chief instructor of the New York "Still Mind" Aiki Shuren Dojo located in Westchester NY. He began wrestling in 1972, Aikido in 1978 and Tai Chi in 1999. He had the rare opportunity of attending 30 days of seminars with Morihiro Saito Sensei, the founder's longest live in student (23 years) and one of only two students of the founder to take over his two dojos upon his passing. Steve simultaneously spent 20 years studying day to day with Seiichi Sugano, a direct student (6 years) of the founder in Tokyo before being dispatched to Australia and eventually to the US. Our dojo has the honor of being overseen by Mark Larson Sensei who received the highest certificate in weapons from Saito Sensei. Saito Sensei gave him the name Takuto, meaning preeminent leader of a tradition. Saito Sensei also named Larson Sensei's dojo Aiki Shuren (“austere training of Aiki”). We are honored to have that name bestowed upon our dojo by Larson Sensei.

Unable to move to Japan in the 1990's to become a direct student of Saito Sensei, Steve Kanney supplemented his practice with the study of Chinese Zen in 1996 with one of the more advanced teachers in the world. Zen and martial arts training maintain a long history of close association: “Zen discipline is simple, direct, self-reliant, self-denying…A good fighter is generally an ascetic or stoic, which means he has an iron will. This, when needed, Zen can supply.” - DT Suzuki Zen and Japanese Culture (pg 62)

Nathalis G. Wamba started martial arts training at the age of six. He practiced Judo for over 15 years and switched to Aikido. He joined the New York Aikikai in 1982 where he trained under the tutelage of Yoshimitsu Yamada Sensei and Seiichi Sugano Sensei. Over these years, he participated in multiple Aikido seminars in the US and abroad, focusing on instruction from Sugano Sensei and Tamura Sensei. His concentration on the training methods of Tamura and Sugano Sensei offers another perspective. Additionally, his training with Tamura Sensei, the senior most practitioner of Aikido in the western hemisphere, is particularly beneficial. Along with Aikido, he has practiced Kendo and Kyudo.

Ric Rivera has been training in Aikido with Steve Kanney Sensei since 2005. He began Aikido to help him to find peace in the midst of conflict and violence. He has taught the children’s program for the Mount Vernon satellite dojo for several years. Ric has been an MTA police officer for 22 years. He has served his country in the military reserve since 1997, including the U.S. Navy Reserve (Operation Noble Eagle/Iraqi Freedom), the Fleet Marine Force, Dignitary Protection for Chaplains, the 4th Marine Division 6th Communication Battalion, protection for the Navy Force Surgical Group, and Crew Chief Naval Boat Police in San Diego, California. Ric is currently in the U.S. Air Force Reserve, McGuire Air Force Base as an Air Transportation Specialist. He has a comprehensive knowledge of security, having served on security details for former First Lady Clinton, President Obama’s Inaugural address, and other government officials in New York State. Along with Aikido, Ric has trained in Jeet Kun Do for six years, and Shotokan Karate for two years. He has attended seminars with the following Sensei's: Sugano, Hatayama, Shiohira, Saotome, Newens, Sato, Chiba, Utada, Goldsmith. In his spare time, he can be found scuba diving. Ric lives with his family in Yonkers.

Kim began her practice of Aikido in 2006 and began assisting in the children’s program shortly thereafter. She was instrumental in creating the Special Needs program, as well as the Early Childhood program. Having a long-time interest in martial arts, Kim likes to cross-train in other disciplines alongside Aikido. Her past training includes Brazilian Jiu-Jitsu and Shaolin Kung Fu. Kim has been interested in mind-body practices for several decades. She has taken seminar classes with M. Saotome, H. Shiohira, S. Sugano, M. Larson and H. Newens. Kim has an MS Marriage and Family Therapy.